Natalie’s guess date was 10-1. I was very patient in week 40, telling myself that I and my two sisters were “late” when we were born and that it’s just a guess date. I actually felt pretty great at 40 weeks, I was still swimming and even running a little bit.

By the next week (41 weeks) the “I” word (induction) started being tossed around and I started to get a little more nervous. I asked the midwives and our doula Julie if they had any ideas to get things moving along. That turned into basically a full time job in week 41- walking, acupuncture, chiropractic, eating weird food, grocery shopping all over Greenville to collect my cocktail ingredients…we all agreed that the cocktail would be the last ditch effort before going for the induction which would have been at 42 weeks. At this point I was getting pretty uncomfortable. I was going to the pool to “swim” but usually ended up just breast stroking and floating along like a whale. I was even jumping up and down in the water hoping to shake the kid out of me. People’s looks at the gym me went from “oh you’re pregnant! Yay!” To “oh honey….” within a few weeks.

I started having different feeling cramps on Wednesday 10-10…at one point I started using my app to time them because they were coming regularly. They were not painful but I definitely knew they felt different than my previous Braxton Hicks contractions I had been having since about 18 weeks. I had a feeling something was up and my husband Mark did too and I think used it as an excuse to leave work early that day. Things kind of stalled out around dinner time, but Julie made the recommendation that we go out for one last nice dinner because it would be our “last party of 2 for a while.” We went to Soby’s and I ate like a pig and yelled at the waiter for taking away my wine glass- I was having a big glass of wine. We came home and I went to sleep at 10pm with the plan to wake up in the morning, take the cocktail, and hope for the best.

At 12:45 am I rolled over in bed and my water broke. I got up to re-read the instructions the midwives gave us on what to do when your water breaks. I remembered in class learning to stay calm, go back to sleep if possible, do some easy things around the house…basically don’t freak out. I actually didn’t freak out for about 15 min, when I started having very strong contractions.

I decided I should maybe let Mark know, so I woke him up and about 10 min later found myself on my hands and knees in the bathroom with contractions lasting about 1:15 long and 3 min apart. I was thinking, “I thought this started out a little slower than this…” and was wondering if we should go to the hospital right now. No, I just started, I kept thinking. Then I threw up my (expensive) dinner and started getting shaky. I was only about an hour into having contractions! Mark was getting nervous at this point because I could not get off the floor. He called Julie a few times and at first she didn’t answer, after all it was about 2:30 am. I remember hearing him walking very quickly around in our house. Our sweet dog came in the bathroom and laid down on the floor with me while I had contractions. 😭

This is where things get blurry for me. Julie arrived at some point and took one look at me and said “we need to go…now.” Of course hurricane Michael was literally coming through Greenville right then. I told Mark I didn’t know if I could make the ride to the hospital because my contractions were so close together and so strong- and we only live 4 minutes from the hospital. I kept thinking that I had half-joked about just having a home birth…but now I was worried that might actually happen.

I finally got off the floor and went to the car- It was a downpour and the wind was blowing really hard. I thought Mark was going to crash the car on the way. It felt like we were driving 80 mph but Mark said after we were really going about 30. We pulled up to the hospital, Julie found a wheelchair for me and I basically rolled out of the car onto my hands and knees outside in the rain because of a contraction. I remember a very large man in a wheelchair staring at me during this. When it was over, I got into the wheelchair and we ran to delivery. Julie said she had called ahead and we were skipping triage. I crawled out of the wheelchair two more times on the ride to the delivery room, on my hands and knees on the floor during contractions- one right in front of the nurses station at delivery, just to make sure they knew I was here 😆

We got into our room, I crawled out of the wheelchair again and was leaning on a chair when someone came up behind me and said “can I take off your pants?” And I said “SURE!” All modesty out the window immediately- and I did not care at all.

They checked me and i was at 3 cm. I was a little pissed but reminded myself that the number doesn’t mean anything. I got on my hands and knees on the bed for a while. I used the birth ball to relax on during my breaks, which apparently were not very long. At some point I remember thinking “these breaks are not 3-4 minutes like I thought they’d be…” Maureen [midwife] suggested I move to the toilet to labor to get gravity to help and relieve some pressure- I thought she was insane to suggest that, but I tried and it was better. Mark stood in front of me during contractions and I held tight onto his belt while Julie did hip squeezes and sacral pressure which definitely helped. The poor registration lady came in for me to sign papers while I was on the toilet- I scribbled something on a line and she literally ran out looking terrified when I was finished. At some point on the toilet I remember thinking “I don’t know about this….I can’t do this much longer, I’m getting tired…”. I said to everyone around me “I can do this…right?” And everyone said yes. I had the thought that maybe I was in transition because of the temporary mental lapse. That was the only time I had any doubt I could do this.

I got into the tub, Maureen checked me and I was at 5 cm but 100% effaced. I was already having the urge to push and I kind of secretly had been pushing a little. I was in the tub for what felt like FOREVER. I don’t actually remember a lot of this. I remember being checked again and she said “ok, 9 3/4, push all you want,” and in my mind it was game on. I pushed for what felt like forever. I kept asking how much longer this would take, fully knowing that no one had an answer to this. Finally Julie said “you haven’t been in the tub for that long…”

I remember seeing the nurses starting to get out towels on the floor, all having gloves on, and having the crash cart close by and I figured I must be getting close. Julie suggested I Captain Morgan it and when I did that I started really feeling pressure. I was pushing HARD at this point. It really did feel like the baby was going to come out of my butt, just like Julie said in class. I finally started to feel like I was making progress. I kept reaching down to feel for a head…the first few times I felt nothing but then I felt it- I was almost there!! I had Mark reach down to touch her head and he looked so excited. I had another rush of energy- I was so close!!

I reminded myself to slow down and resist the urge to blast this baby out. I really really really did not want to tear and I’m pretty impatient as it is, but I really told myself to slow down and listened to the midwife’s instructions. I remember her head finally coming out and thinking I still had to push her shoulders out, but then the midwife said “reach down and pull her up!” And I thought WHAT?! …but I did and Mark and I pulled up Natalie at 7:54 am!! She came out of the water screaming. We did it!! I couldn’t believe that she was finally here. 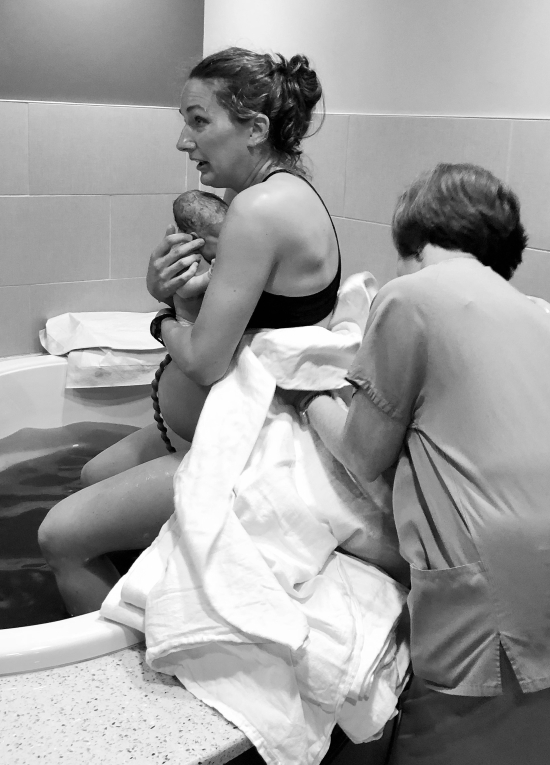 Apparently on my walk to the bed, I told Mark “that wasn’t that bad! I could do it again!” (About the whole birth). …the hormones are wild, dude. I vaguely remember thinking that, but I didn’t think I actually said it.  For reference, after my first marathon the first thing I said was “I am NEVER doing this again, this is stupid!” 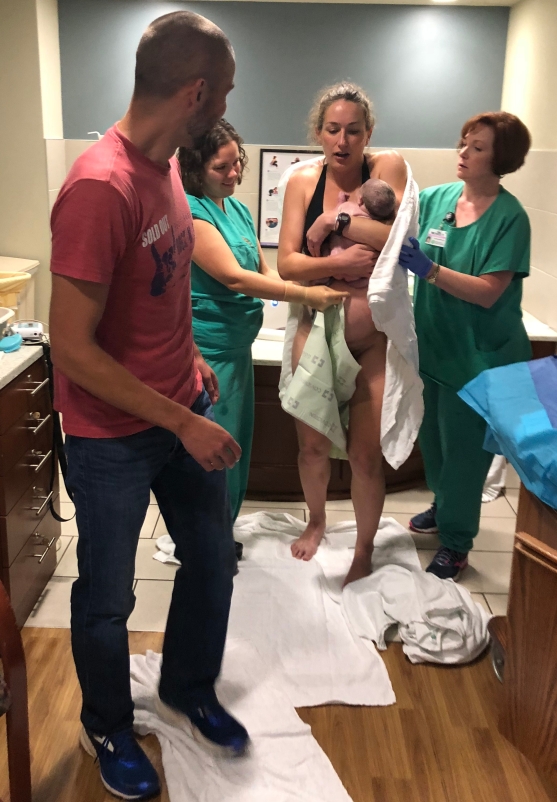 The real relief came when I delivered the placenta and had a HUGE blood clot busted out by the midwife. When she pushed on it, it was like instant relief but the look on everyone else’s faces…my husband still says I’m lucky I couldn’t see how much blood I lost [it was a normal amount; just all at once]. The midwife told me there were no tears and was SO happy I was patient during pushing and went slow. I am not normally the most patient person.

All in all, I could not have asked for a better experience and I hope if we have another baby, it goes the exact same way. The nurses jokes that I took the “express route” for labor and delivery- strong and fast contractions right from the start, and only 7 hours start to finish. My labor was much like my running/athletic life has been- I like to do intense workouts and push hard, but not for that long.

[Doula note:  This birth was intense right from the start with an involuntary urge to push at 3cm.  The amazing midwife, Maureen, didn’t say “don’t push.”  She instinctively knew that this uterus knew what it was doing, and she took a hands off/voice off approach. The result was that the birthing woman was fully dilated in a few hours with a baby lined up and ready to be born.  Every birth is different!] 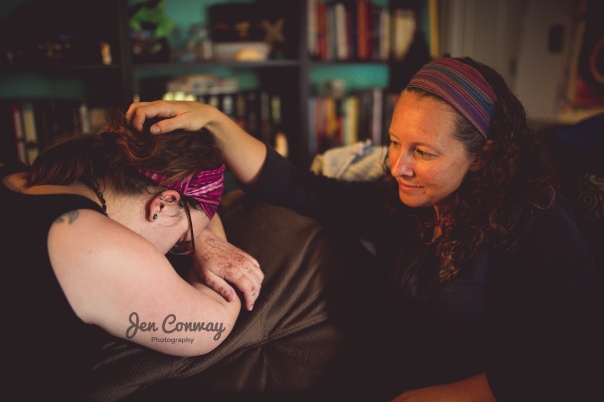