Even only 3 days after her due date I had started to get paranoid that our baby was going to be more than 2 weeks late, so we had started doing those well-known practices designed to get her moving. There was no way I wanted to be induced or to go anywhere near a hospital to give birth to our baby. I knew in my heart I really needed to have her at home. Our midwife recommended a lovely date night, with lots of laughter, good chocolate, sex and relaxation. All that fun and one cup of raspberry leaf tea put me into labour the next day, which was, unfortunately, Christmas day.

I lost my mucus plug the night before and at 4am on December 25th I started having labour pains that felt slightly more ‘real’ than the Braxton-Hicks I had been having for the previous 3 weeks. My husband and I did the gift exchange and started making dinner in the morning, but by 12pm my contractions were 4 minutes apart and getting strong. We abandoned cooking and rang our midwives.

When they arrived there was a flurry of activity that I remember not really being aware of. They set up the pool and from there on all I remember was the intense need to get into bed and go to sleep. It’s really very strange being woken up by your body every few minutes to deal with a contraction. You and your body are in agreement one moment (‘Yes. Sleep. Let’s go to sleep’) and the next moment it is shouting at you to wake up and deal with shit that you had forgotten about while you were in dream state. If I could give any advice to someone in early labour it would be the advice that I was given and ignored when I was in early labour. GO TO SLEEP WHILE YOU STILL CAN!

Other things that we had been told would happen also happened to us. Looking at a clock is a joke. Time doesn’t make sense except that in moments of clarity you’re like ‘how the hell did it get to be 8pm?’ During my labour I remember (don’t ask me why) really being hung-up on her being born before 12am. Why? I wouldn’t wish a Christmas day birthday on anyone, so I don’t know why I was so obsessed with getting her out before 12. I kept thinking ‘just as long as she is born before 12, that is all that matters’. Now in hindsight I think this is pretty hilarious. Really? The only thing that matters is that she is born before 12am? So her health isn’t an issue then…

By about 9pm I was in the pool (oh sweet sweet water…) and was still breathing through contractions with the help of my amazing husband, who incredibly never pissed me off throughout my entire labour, but was an absolute tower of strength. Even at one moment when I looked at him (God, I was so tired) and asked him quite sincerely how I could make it stop, and I knew it broke his heart, he still kept acting like everything was going perfectly and that he was proud of me. Bless the man. Anyway, around this time while I was breathing through a particularly strong contraction, a guttural and ungodly noise escaped my mouth. Charlie (my husband) told me later that it scared the shit out of him. I was surprised to even know it had been me who made the sound! It was the sound of someone pushing hard, except that I had not voluntarily made that noise at all.

I remember having learnt that if you are at pushing stage then it means you are out of transition stage, and transition stage had been my biggest labour fear. I imagined it to be the kind of crest of the wave. Full of pain and chaos and hallucinations. Of course it wasn’t like that at all but the fact that I was into pushing stage really kicked me into a different gear. I let go of a lot of fear at that point and felt stronger. Ha! I was at pushing stage and I hadn’t asked anyone to get me to a hospital for an immediate epidural!! Take that labour pain!!! I think that may have been the point where I also started to accept that our hopes for the birth might actually happen. I was going to have a baby at home. I had always had a nagging doubt that I was just not quite strong enough to do it, but if I was at pushing stage already, then yes I was strong enough.

Pushing for me unfortunately lasted a long time as I had a 2cm anterior lip. I had to breathe a lot when all I wanted to do was push. I remember the midwives suggesting different rooms, different positions, different tactics to try to get me through this very upsetting turn of events. I didn’t realise at the time, but Florence was still another 5 and a half hours from being born. Fortunately, nobody was there reading my future and so I just dealt with it. When I finally started pushing I remember everyone being so encouraging. They kept saying things like ‘You got this!’ and I felt like saying ‘Can everyone please just stop saying I’ve got this when I so obviously haven’t. I am totally failing at it.’ My thoughts were starting to turn negative and the first thing to go was my self-confidence.

When the midwife got me to feel Florence’s head as she was crowning I gained back some renewed vigour. Pushing was not as bad as I thought it would be. Even the much-feared ‘ring of fire’ part was not that bad! When the midwife got Charlie to catch her I was thinking ‘Are we already at this part?’. This is also hilarious in hindsight. I had been in labour for 22 and a half hours! 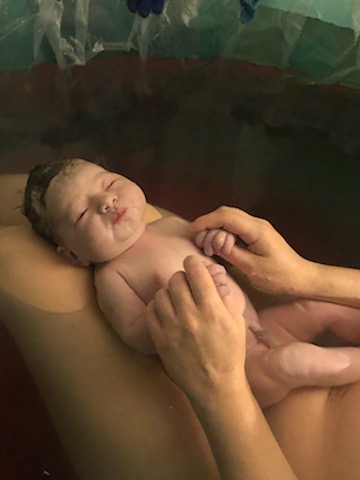 Charlie finally brought her up from the water and put her on me. He was crying. I tried to cry too but there was nothing in me left to cry with. I thought I was a weirdo for not crying. Even now I think I’m a weirdo for not crying. She was just exactly as I had imagined her though. Me and Charlie said ‘She is just so Flo’, because truly she looked like she had been born to rock that name.