I was always very afraid of giving birth. Everyone always uses “childbirth”- particularly “natural childbirth”- as the marker for the greatest amount of pain that a person could possibly endure. I didn’t realize how 28 years of hearing negative associations of birth had shaped my perception and anticipation of it. When I got pregnant, I was excited about having a baby but dreading giving birth.

Due to prior surgeries and health issues, I planned to give birth without an epidural. Even though I knew little to nothing about childbirth, I knew that in order for this plan to be successful, I would have to prepare. My husband and I enrolled in Hypnobabies, which was probably the best thing we did during my pregnancy. It helped us to clarify our desires for our birth, and it was extremely informative. Listening to the tracks really relaxed me and helped me to visualize a positive birth experience. Toward the end of my pregnancy, I listened to the “Fear Clearing” track and the “Visualize Your Birth” tracks constantly to ease my anxiety and help me focus on a birth in which everything went well.

On July 27, I was about a week past my guess date and had a doctor’s appointment that day. I really didn’t want to go to the appointment because I didn’t even want to think about an induction since that wasn’t part of how I’d visualized my birth. My appointment was at 9:00 that morning, but around midnight, I started having pressure waves. I knew immediately that these were different than the Braxton Hicks I’d been having for a month. These started slowly in my lower back and wrapped around to my abdomen. I texted Julie that I was pretty sure that my labor was starting and that I was going to try to sleep.

As it turns out, I couldn’t sleep because I was so focused on what was happening in my body and just thinking over and over again that today was going to be the day that I became a mom. I listened to several different Hynobabies tracks and tried to focus on the scripts. The entire time, I noticed that the pressure waves were getting closer together.
I called Julie around 3:00 in the morning, and she told me to get in the bath. The bath was very relaxing, and around then, I feel like I lost my sense of time. I was in and out of the tub all night. Julie came over around 9:00 in the morning. At that point, the waves were getting stronger and more frequent. She gave me several different positions to try to ease the pain in my left hip. 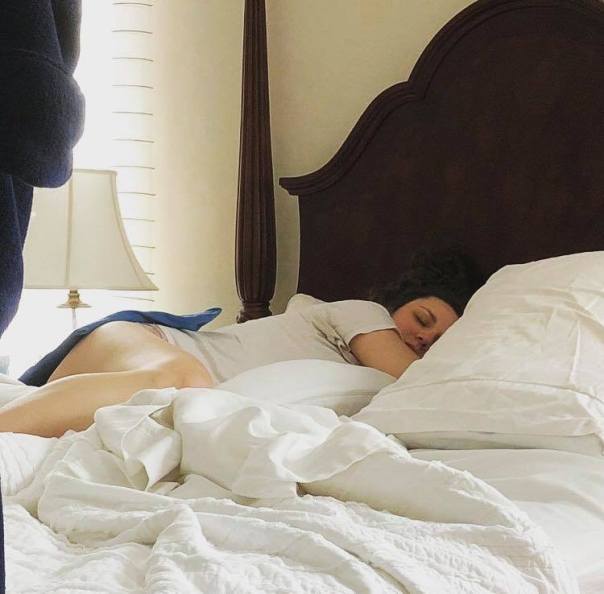 Again, I was in and out of the tub. When I was in the tub, the waves would space out, but as soon as I would get out, they would get closer together.

We finally decided to go to the hospital in the early afternoon. My biggest concern at that point was that I would get there and they would tell me that I was only a couple centimeters dilated. However, that concern quickly faded when we were leaving the house and I started feeling what I realize in retrospect was the urge to push.
We live a ways away from Greenville Memorial, and suddenly, I was worried about making it through a 30 minute car ride. To make matters more interesting, once we started driving, my husband realized that I didn’t have enough gas in my car to make it to the hospital. (I was planning on getting gas the next day, but now as a general rule, I’d suggest keeping a full tank when you’re past your due date 😉 )

Despite my begging him not to, we stopped at the gas station to get just enough gas to make it to the hospital. Julie popped her head in to check on me while I sat in the car. My pressure waves were now starting to be accompanied by the desire to push.
We got back on the road and made it to the hospital. Julie grabbed a wheelchair and took us up to the 6th floor. Just as we approached the admissions desk, I had a pressure wave and was immediately taken to a room. The midwife checked me, and I was 8.5 cm, so they put me back in the wheelchair and took me to a delivery room.

As we got into the delivery room, my water broke. The nurses started the fetal heart monitor and said that they needed to get 20 minutes of monitoring before I could start pushing. After 11 minutes, they said they’d gotten what they needed and that I could get in the tub.

I got into the birthing tub, and Jonathan started playing the Hypnobabies music on my phone. I remember there being some discussion about which track to play, and I can’t remember why we just played the music, but it was very calming. As I lay in the tub, surrounded by my husband and doula and midwife and nurses, unattached to any IV’s or monitors, with the Hypnobabies music playing, I couldn’t help but think that this was not how I had previously imagined childbirth. It was so much calmer and so much better than what you see in movies.

At that point, I started pushing any time I would have a pressure wave. I was surprised at how instinctual and involuntary the pushing was. As I was pushing, it was as if time stood still and as if I was watching this all happen. I knew that I would have my baby very soon.

Jacob was born at 3:46 pm. Maureen [midwife] placed him on my chest, and I still felt as if I were watching this all happen. The adrenaline was high, and I really could not believe that this baby- the one whose kicks I’d been feeling for months, whose hiccups started up most nights after dinnertime, who had been settled in my left ribcage for a month- was finally on the outside.

A few minutes after he was born, they told me to get out of the tub and walk over to the bed. I had just given birth, and I was carrying a slippery baby, and in my head I thought, “I can’t believe they’re trusting me to carry him across the room! What if I slip?!” But then I remembered that he was still attached by umbilical cord, so who else was going to carry him? Plus, I’d just given birth, so a walk across a room should be easy in comparison. I really did appreciate how I could move so quickly and freely immediately after giving birth.

Now that I have had a few weeks to get to know him, I appreciate Jacob’s birth and connect it to him on a much deeper level. The whole time I was pregnant and throughout my birthing experience, I knew I was having a baby, but didn’t know what he would be like. Now I know that it was him- it was always him, the boy who raises his eyebrows in a way that wrinkles his entire forehead, the boy who loves to curl up his long legs and tuck them up under himself like he’s still on the inside, the boy who has an impressive amount of neck control and will position himself in the way that he wants (not the way that you want), the boy who will push a burp cloth or a shirt out of the way so that he can lie on your skin, the boy whose mouth forms a perfect “O” when you pick him up in the middle of the night, as if he’s hungry but also surprised to see you. His birth was the event that linked all of these realizations and knowing to all of the months of pregnancy and wondering. Now that I know him, I’m especially glad that we chose a gentle birth experience.

I’m no longer afraid of birth. There is a quote on the wall at the midwives’ office that says, “There is a secret in our culture, and it’s not that birth is painful. It’s that women are strong.” After giving birth, that quote really resonates with me. I wish that we as a society spent as much time honoring the strength and endurance that women have in pregnancy and childbirth as we do lamenting the pain and telling birth horror stories. Everyone always acts like they are doing you a favor by telling you the “secrets” about giving birth, which are always the same few hospital and postpartum woes. The real favor would be telling women this: when you give birth, you will find a strength that you didn’t know you had. Your body was actually designed for this, so you can trust it. You are uniquely capable of bringing this life into this world, and the way that you will rise to the occasion is incredible—and that shouldn’t be a secret.